Every year, the Florence School of Banking and Finance organises an executive seminar, an occasion for the members of its advisory council to gather and debate on a pressing topic in the European banking and financial landscape.

This year’s executive seminar, publicly web streamed, was centred on the following question: what is behind the disinflation over the course of the last three decades?

For Charles Goodhart, the co-author of ‘The Great Demographic Reversal: Ageing Societies, Waning Inequality, and an Inflation Revival’ by Goodhart and Pradhan, it is a combination of demography and globalisation. In their presentation, the authors explained the core arguments raised in the manuscript and reflected on their relevance for the post-pandemic

According to Goodhart, demographic changes and globalisation produced a ‘massive supply shock’, providing employers with an unseen supply of labour force. For one part, it was the shift of production to countries with growing working age population and lower labour costs – like China – combined with reimporting of goods to Europe and the US. In addition, the drastic increase of women’s labour force participation, witnessed from the 1950s and driven by decreasing birth rates and the availability of consumer durables, further contributed to the vast growth of available labour force.

Demographic changes and globalisation led to a dramatic change in the ratios of workers’ wages across the globe – from the US to Western Europe, to Eastern Europe and China.

The authors argue that this meant a sharp decrease in inequality across the world economies, yet maintained and further enhanced inequalities within national economies leading to the rise of populism and anti-globalisation movements. Another crucial effect of the demographic change, notably the aging of population, has been an important increase in consumption by the elderly. With the increase of the average life expectancy, the impact of age-related diseases has led to a sharp increase in healthcare costs and spending. ‘We, old people, are expensive!’ exclaims professor Goodhart. For labour markets aging population means more workforce allocated to healthcare: care homes and other facilities.

Goodhart compares the expenditure and growth of public debt of the Covid-19 pandemic to wars. Luckily, these are finite. Unlike the deficits accumulated as a result of wars or pandemics, the growing expenses and deficits stemming from the aging population are permanent. Therefore, the main long-term concerns raised by the authors are not Covid-19 related. Where the solution, normally, would be faster growth, more productivity or increases in taxation, these are unlikely due to demographic changes (falling numbers of labour force preclude fast growth and productivity) or are politically undesirable (taxation). Against this background, inflation appears to be ‘a political optimum’: although unappealing, inflation does not entail the need to take politically extremely unattractive measures.

The emphasis on the preconditions and models to project inflation are extremely timely.

Manoj Pradhan emphasised this by discussing the changing role of China on disinflation. According to Pradhan, the predominant view of China as capable of lowering inflation indefinitely, is wrong. China’s most-favoured-nation status in 2000s lead to a labour release but did not create unemployment. Instead, it produced a shift in the composition of growth, procured by the plummeting of the interest rates towards zero and the push forward of the housing boom. As a result, the construction employment went up while manufacturing employment went down. This shift normalised the difference between an economy’s actual output and its maximum potential output expressed (output gap) without rising inflation. Today, however, the role of China does not allow for disinflation and for the American housing market to raise at a constant pace.

How will the pandemic impact Charles Goodhart and Manoj Pradhan’s thesis?

High monetary aggregates due to inability to spend in lockdowns also led to a sharp decrease in the velocity of money. Although Covid-19 income has been higher than Covid-19 expenditure, the authors argue that this is likely to change in 2022, leading to ‘surprise’ increases in inflation.

The presentation by the speakers was followed by questions and comments from the member of the Advisory Council of the Florence School of Banking and Finance, as well as questions raised by the audience. 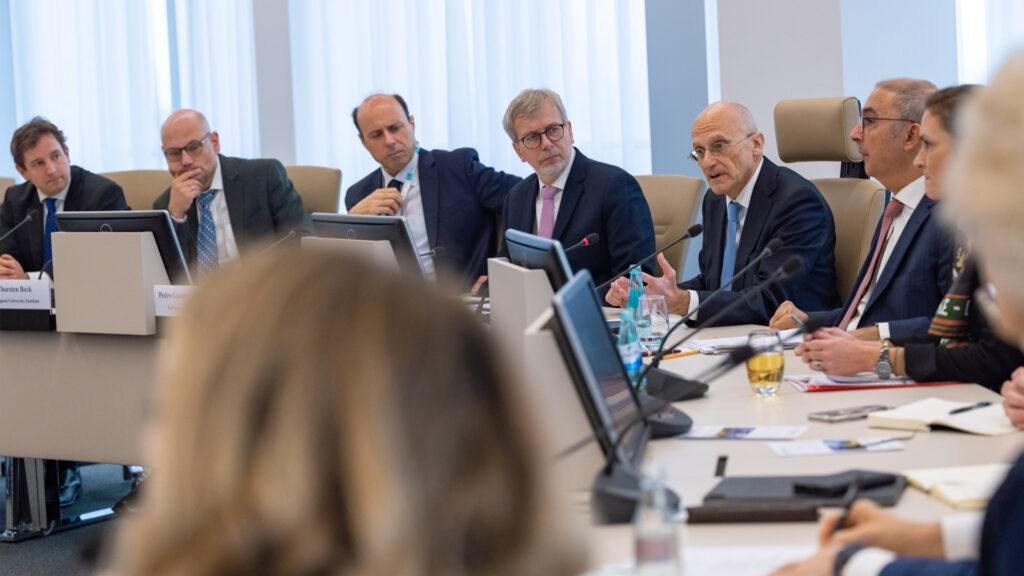