What can green securitization really do?

Green securitization – which captures a diversity of techniques using various eligible assets – is a relevant tool to tap into the depth of the bond market in order to finance green investments. Speaking at a conference on international Financial Regulation and Sustainability organized by the University of Genoa/EUSFiL, the University of Zurich, The University of Geneva and the Max Planck Institute Luxemburg on 9 November, Pierre Schlosser* (Scientific Coordinator and Research Fellow, Florence School of Banking and Finance/EUI) presented and discussed the merits and limits of green securitization in the context of going to net zero. The presentation largely drew on two recent papers co-written with Dr. Christy Petit (Dublin City University).

Pierre Schlosser explained that green securitization belongs to the techniques that could contribute to increasing the depth of green bond markets thus helping to match a growing investment appetite among institutional investors. The market is currently growing but remains small in size, when one remembers that, for instance, green ABS constitute 2 to 3% of the global ABS market. In the US it has grown significantly in past years, also through the involvement of public mortgage agencies like Fannie Mae and Freddie Mac.<

Yet, he also stressed that green securitization, still in an early phase of market development, faces many challenges, in terms of costs, risks, and limitations. Nevertheless, there are opportunities in green securitizing financial products for which several policy incentives could help, in particular in leveraging such tool for the broader transition of our economies.

In his intervention at this hybrid conference, Pierre Schlosser recalled that energy finance is shifting from an approach in which a small, concentrated number of highly capital intensive large-scale capacities are financed by large banks towards a model in which numerous and fragmented lower cost and small-scale investments are financed by capital market investors. Capital markets, which rely on an incredible diversity of actors, will indeed be crucial to accompany this change towards a more fragmented reality.

The discussion then focused on two key aspects: 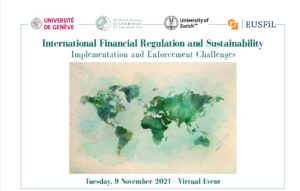 *Pierre Schlosser is also the co-director of the FBF Climate Risks Academy (co-organized with Oliver Wyman and in scientific collaboration with STG at EUI), which will be held online from 21 February to 18 March 2022. More information about the Academy and its registration process here.