Commissioner McGuiness will offer a keynote address on the occasion of the FBF Annual Lecture. This lecture represents the kick-off event of a new lecture series “Women in Finance” which aims to highlight successful women across different areas of finance, public service, academia, and private sector. “For many, the financial world feels distant and complex. As Commissioner, I want to help bridge the gap between citizens and the financial institutions that serve them. At an individual level, boosting financial literacy can help give people the knowledge they need to make sound financial decisions. That needs to be complemented by our other policies, including consumer protection. More broadly, financial regulation should keep people in mind. Developing the Capital Markets Union would allow investments and savings to flow across the EU. Our upcoming retail investment strategy will help retail investors participate in capital markets. We need to keep up with technology, putting the right regulation in place to ensure people can benefit from the latest innovations safely – including encouraging the development of innovation in retail payments. Financial markets should be a force for positive social change, particularly with regard to the environment.” 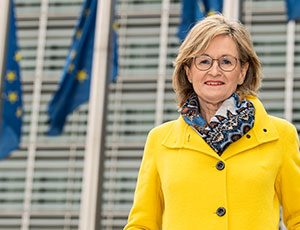 Mairead McGuinness is the European Commissioner for financial services, financial stability and Capital Markets Union. Before joining the Commission in October 2020, Ms McGuinness was First Vice-President of the European Parliament from 2017. She served as an MEP from Ireland for 16 years, and was a Vice-President of the Parliament since 2014.
Read more
Apr
21
Wed
Coordinating Euro area fiscal policy to drive an inclusive recovery @ Online
Tickets
Apr 21 @ 11:00 am – 12:15 pm
Register here

The Florence School of Banking and Finance and the European Governance and Politics Programme at European University Institute are happy to invite you to the:

with Paschal Donohoe, Irish Minister of Finance and President Eurogroup

Co-organized with Oliver Wyman, in scientific cooperation with the EUI’s School of Transnational Governance

Thorsten Beck is currently professor of banking and finance at The Business School (formerly Cass) in London. He is also a research fellow of the Centre for Economic Policy Research (CEPR) and the CESifo. He was professor of economics from 2008 to 2014 at Tilburg University and the founding chair of the European Banking Center there from 2008 to 2013. Previously he worked many years in the research department of the World Bank and has also worked as consultant for – among others – the European Central Bank, the Bank of England, the BIS, the IMF, the European Commission, and the German Development Corporation. He is also a member of the Advisory Scientific Council of the European Systemic Risk Board (ESRB) and is co-editor of the Journal of Banking and Finance. His research, academic publications and operational work have focused on two major questions: What is the relationship between finance and economic development? What policies are needed to build a sound and effective financial system? Recently, he has concentrated on access to financial services, including SME finance, as well as on the design of regulatory and bank resolution frameworks. In addition to numerous academic publications in leading economics and finance journals, he has co-authored several policy reports on access to finance, financial systems in Africa and cross-border banking. His country experience, both in operational and research work, includes Albania, Bangladesh, Bolivia, Brazil, China, Colombia, Egypt, Malaysia, Mexico, Peru, Russia and several countries in Sub-Saharan Africa. In addition to presentation at numerous academic conferences, including several keynote addresses, he is invited regularly to policy panels across Europe. He holds a PhD from the University of Virginia and an MA from the University of Tübingen in Germany.

Luiz Awazu Pereira da Silva became Deputy General Manager on 1 October 2015. Before joining the BIS, Mr Pereira da Silva, a Brazilian national, had been Deputy Governor of the Central Bank of Brazil since 2010. Prior to that, he worked in various positions for the World Bank in Washington DC, Tokyo and southern Africa. He also served as Chief Economist for the Brazilian Ministry of Budget and Planning, and as Brazil’s Deputy Finance Minister in charge of international affairs.

Appointed to the board of Aviva plc on 26 June 2015. Belén is a highly respected former senior Spanish civil servant. In 2000 she was promoted to Director General for Economic Policy, with responsibility for coordinating macroeconomic and microeconomic policy across several industry sectors. In 2003 she was appointed Head of the Spanish Treasury, reporting directly to the Minister of Economy and Finance. She has a significant knowledge of financial services, including insurance and regulation, and a broad European experience working with European Commission, the International Monetary Fund (IMF), the European Central Bank (ECB), and the Organisation for Economic Co-operation and Development (OECD). Belén was formerly President and Chairman at Sareb (asset management company), where she managed various stakeholders with interests in Spain’s economic stability across Europe; Secretary General at Círculo de Empresarios; and Strategy and Corporate Development Director at ONO (telecommunications company) with responsibility for investor relations, risk management and the internal audit departments. She has also held Non-Executive positions at Ageas (insurance), Acerinox (stainless steel manufacturing conglomerate) and Banesto (banking). Belén is currently an independent Non-Executive Director of Banco Santander (banking) and is a member of the advisory board of the Foundation Rafael del Pino and co-chair of the Global Board of Trustees of The Digital Future Society.

Axel A. Weber (Chairman of the Board of Directors, UBS Group AG)

Axel A. Weber has been Chairman of the Board of Directors of UBS since 2012. He is chairman of the Institute of International Finance, a board member of the Swiss Bankers Association and a member of the Group of Thirty as well as the Trilateral Commission, among others. Mr. Weber was president of the German Bundesbank between 2004 and 2011, during which time he also served as a member of the Governing Council of the European Central Bank, a member of the Board of Directors of the Bank for International Settlements, German governor of the International Monetary Fund and as a member of the G7 and G20 Ministers and Governors. Mr. Weber’s academic career includes professorships at the Universities of Cologne, Frankfurt / Main, Bonn and Chicago. He holds a PhD in economics from the University of Siegen, where he also received his habilitation.

This seventh online seminar takes place in the framework of the Challenges for Bank Board Members series, which aims at building a community of professionals from the banking and finance industry interested in deepening their knowledge about bank boards’ functioning and learning how to challenge bank management effectively. Seminar speakers include an international faculty of regulators, supervisors, and academics together with bank and finance professionals. The Challenges for Bank Board Members series is part of the new FBF Bank Board Academy for Non-Executive Directors. 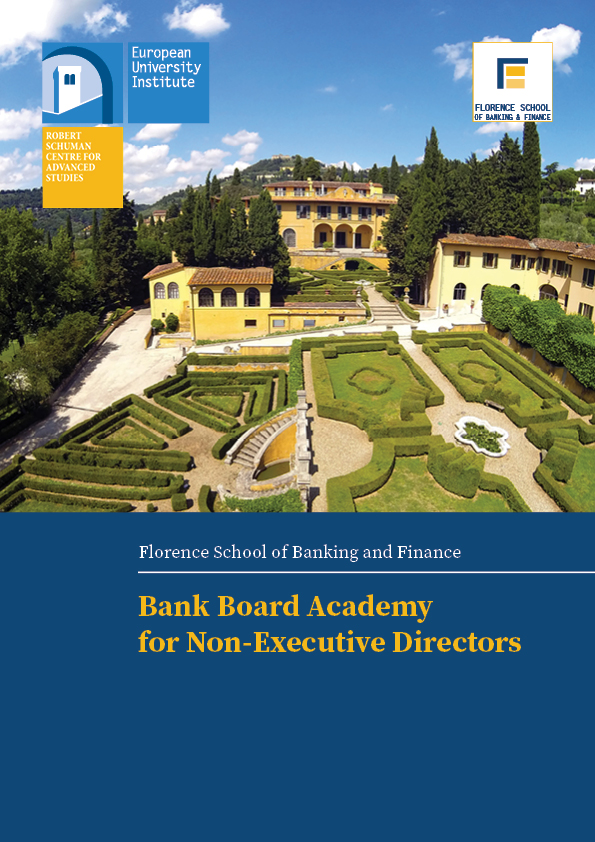 Download the brochure to know
the details and fees of
FBF Bank Board Academy
for Non-Executive Directors!
Download brochure

The first event of the #FBFDiscuss series will develop around the motion: ﻿“This house believes that the ECB should include climate change mitigation within its mandate.”

Greening the mandate of the European Central Bank (ECB) is intensely debated in policy and academic circles, also in the context of its monetary policy strategy review, with results expected later in 2021. The political, economic, and legal room for manoeuvre is questioned to address the challenges posed by climate change mitigation within the central bank’s mandate. Is the ECB mandate fit for green purposes? Could the operational framework of monetary policy contribute to broader EU policies to fight climate change?

Dirk Schoenmaker, Professor of Banking and Finance at the Rotterdam School of Management.

Dirk Schoenmaker is a Professor of Banking and Finance at the Rotterdam School of Management, Erasmus University and Director of the Erasmus Platform for Sustainable Value Creation. He is also a Fellow at the think tank Bruegel. His research covers the fields of sustainable finance, central banking, financial supervision and European banking. Before joining RSM, Dirk worked at the Dutch Ministry of Finance and the Bank of England. Dirk is (co-)author of Principles of Sustainable Finance (OUP), Financial Markets and Institutions: A European Perspective (CUP) and Governance of International Banking: The Financial Trilemma (OUP).

Hans-Peter Gruener, Professor of Economic Policy at the University of Mannheim.

Hans Peter Grüner is Professor of Economics, Economic Policy at the University of Mannheim. His research focuses on the design of political and economic institutions (mechanism design), European financial and monetary policy, political reforms, capital markets and the distribution of wealth.  He has been a consultant to various companies and government institutions including UBS, BMW, the European Commission and the European Central Bank. He is a Research Fellow of CEPR, London and an Adjunct Professor at the Hertie School of Governance in Berlin. Grüner has published in leading international journals, including the American Economic Review, Econometrica, the Economic Journal, the Journal of the European Economic Association, the Journal of Economic Theory and the Journal of Public Economics. 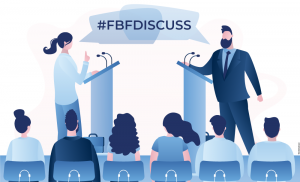 #FBFDiscuss is a new Oxford-Union style debate format that will bring together two contestants from academia to debate a specific motion. After the opening statements, the event will see the direct participation of the public who will have the chance to pose their questions and vote for their favourite opinion.